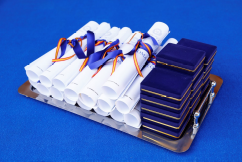 The Baccalaureate exam is taken at the end of year 7 in Secondary.

On passing the exam, the Baccalaureate diploma is awarded, which is recognised by all Member States of the European Union along with a number of other countries.

Pupils can enrol in Universities and Higher Education Institutions of all European Union countries with the same rights as citizens who have pursued their studies to the same level in that country.

The Baccalaureate exam is based on the subjects taught during years 6 and 7. Pupils may participate in these exams providing they have studied a minimum of the final two years of Secondary education.

Pupils must obtain an overall mark of 50% in order to receive the diploma.

TRANSLATIONS AND CERTIFIED COPIES OF THE EUROPEAN BACCALAUREATE DIPLOMA

If you are a former student of the European School of Alicante you may apply for a translation or certified copies of your Diploma by filling out the online form hereunder.

Please note that the School will need 2 weeks time to respond to your request that will have to be made through the form. Documents will be sent only by mail post to the address indicated in the form. Thank you.